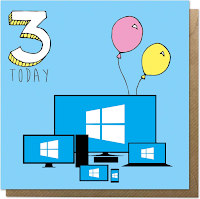 Why? Well, Microsoft have followed a two releases a year cycle ever since and each arguably release has been a new version - we have had: The catchy titled 1511 edition after 4 months, then the Anniversary edition after a year; the Creators Update in April 2017, followed by the Fall (its Autumn!) Update in October 2017 and now we have just had the April update in, err, April 2018...


So - is it the same - No, not really. Its actually changed quite a bit and I think that most of the rough edges at launch have gone, especially the parts where Windows 7 or 8 resurfaced (like the Control Panel) have largely gone now and there has been a general refinement of the UI. However it still feels and acts the same. Sadly, though the quality of new features has slipped - most new features added (like the fantastic port of the Surface Hub's Whiteboard) have had bugs and glitches that needed squashing taking away the polish from what often is good new functionality. I think this is sometimes down to needed to stick to the twice yearly release cadence - its not turned out to quite be Windows As A Service as originally described its not exactly a continually updating Operating System.

I admit (and have done in the past) I am a bit of a Windows fan, and do rather like Windows 10 and I can do this in a rather unbias way as you see I am also a multi Mac owner and Mac user at Work. I have no personal dislike against Apple - I've been an iPhone user since the 2nd generation, I'm on my 3rd iPad having had one of them since the 2nd generation - I learned after getting a 1st generation Mac Mini - my first Mac - to always skip the 1st generation of any Apple product! I also have 2 Mac Book Pro's a 17 inch beast that I've had for 4 years and also a latest generation Mac Book Pro 15 inch with a touch bar that I use at work.

So how to compare the Windows 10 three years on to Mac OS and which do I favour... Well they are really quite different beasts now, given I have a choice I've chosen to write this on my Windows 10 laptop it probably shows which I favour - and as to why: I think the UI of Windows 10 is more intuitive, in particular keeping the mnu bar attached to the window it belongs to is hugely helpful particularly on a big monitor - less mouse travel. Keyboard shortcuts seem better thought through - like the classic ALT-TAB cycling through all windows, whereas on a Mac its a combination of CMD-~ and Opt-~ to cycle applications and then windows within applications... I also think Windows 10 has better multi-desktop support - although Mac wins out on easy switching between them. Mac OS also just feels a bit dated now, its not had a proper refresh for a while it seems clunky, and not that user friendly... Finally the lack of touch screen support is also a shameful miss! The Touch bar does not in make up for this and comparing a Surface Pro to a Mac the Pro really wins now!