Can the 4th Industrial Revolution solve our world of conflicts? 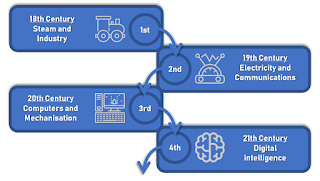 Today we live in a world of contradictions, we have people dying of obesity and yet also of hunger; we have those who have a *lot* and those that have none; there are diseases that kill in some parts and are eradicated in others. To quote Voltaire (and some also say Spiderman), "with great power comes great responsibility", the 4th Industrial Revolution of "Digital Intelligence" creates great new powers through harnessing artificial intelligence - can we use these new powers responsibly?

The first industrial revolution was steam and the creation of large scale industry which started in the UK in the 18th century, it lead to the rise of industrialisation, the railways and importantly urbanisation - from the countryside to cities. Half a century  later, the second revolution was of electricity and communications - such as the telephone which brought a second wave of change through the newly created industries. During both of these revolutions saw the beginnings of the contradictions we have today. Many, many people become incredibly rich others incredibly poor.

The third industrial revolution was computers and mechanisation (robots) which wasn't until the 1970's and 80's and saw the electronic revolution where computers transformed our lives and our ways of working - particularly through industry with the mechanisation and automation of production, transformation of the office environment and ultimately the creation of true home working enabled by the internet.

We are now into the fourth revolution, called the digital intelligence revolution. The outcomes of this will be one of significant transformation. Machine Learning and ultimately Artificial Intelligence (as was the topic of a previous weeks blog post) will have the ability to transform lives - from automating cancer diagnosis to self driving transportation to take us to the shops - and those are just two simple examples, as the robotic technology improves we will have many more smart robots throughout our homes and these will just be the normal way of life for many. For our children this we just be their normal way of life - my 5 year old is perfectly happy to "ask google" to play her favourite songs, TV programmes and to turn on/off the lights a voice controlled home for her will be as normal as was one with central heating for me.

However, whilst all of this new power can be incredible and trans-formative the potential for it to be miss-used also is there. Many people will make their fortunes (as was the case in the last three revolutions) off the back of this revolution so the ability to close the divide between rich and poor will continue to be difficult...

The seeds are all there for great things to be done, those same seeds could be used for war, terror and threat too. Not only could they make good things they can quite easily be harnessed in other means yet, there are signs of pushing back and a bias towards positive outcomes. Ultimately, this new power be a great equaliser too - by bringing medial care and diagnosis to areas its never been possible to reach before? Harnessing ML powered drone technology for delivering crucial supplies such as medicine or food aid? Bringing help to those who need it? Will this revolution finally give people that much promised free time back to allow people more time for others? Or... will we continue to use the power for our own self benefit?

Personally I do hope that the fourth industrial revolution turns out to be primarily a force for good - great change for humanity, a phase that future anthropologists will look back on positively as a way the technology was able to be used to support and benefit us all.  My ultimate measure of success would be if we could eliminate just one of my first two contradictions - either eliminating hunger or eradication of killer diseases globally not just in some countries. Is this too much to wish for?

Then I wonder what the 5th industrial revolution will bring.....!