Sometimes as a Windows user, and particularly a Windows 10 user you can feel a bit out of place within the developer/engineer community. Years ago when Mac's were actually trendy to have, most people developed on Windows and had a a bit of a sneer about anyone who used a Mac.. There was also always the set of people who were the other extreme with a Gnome or KDE linux desktop but those were rare. And, currently Elementary is the latest trendy OS to be different with...

Now I work in a trendy office fully of trendy people all with shiny silver Mac laptops, there is a debate as to if an Air or a Macbook is the best choice - and the new Macbook is very close to an Air to blend the line between them and I myself am one of only a couple of Windows hold-outs left. I have my Dell XPS 13 laptop which weighs less than an Air, has a 4K touch screen and is more powerful than most Mac's - so I smile smuggly at them whilst thinking that I am in fact already on the next trend wave and ahead of the curve of a switch back to developing on Windows. And maybe this is getting a step closer to reality...


For quite a while as a lonely Windows based developer its been like a cog was missing. Whilst I love the new Visual Studio 2015, and Visual Studio Code... My suite of Windows tools its always felt there was a lack of a particularly a good command shell. Yes, Windows has CMD, and it also has PowerShell which with a Visual Studio plug-in can be quite accessible but... Well, lets be honest neither are particularly practical. Or feature rich. 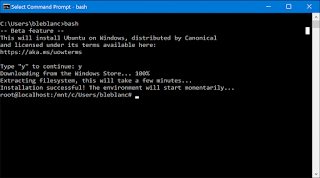 I also think its great to see the original "NT" core that has underpinned all of Windows for the last few versions finally being used for what it was really created and intended for - running multiple host OS on a shared core. Brilliant use of the technology.

It also means - when it leaves developer build status - I will have an even better developer environment on my Windows laptop.