I've actually been looking forwards to Windows 10 coming out for quite a while. Having been exploring "Internet of Things" (IoT) and the concepts that could offer I was quite keen on the new version of Windows arriving as its the first one that can run on micro computers (like the Raspberry PII 2) and I liked the idea of a harmony operating system across all devices. The concept of the Universal App framework as a means to speed up development and maybe do away with that need to create the same thing multiple times in various different ways to handle different devices abilities.

I tried an early Windows 10 RT version a few months ago and felt it was all a bit buggy (as you would expect for a preview version) and thought that I would wait for the consumer version to be released.

I have a lovely Dell 24-inch XPS (see a different post!) which being the latest form factor of a portable yet powerful tablet it seemed a perfect candidate to upgrade from Windows 8.1 to 10.

My XPS doesn't have anything (apart form Microsoft Office) installed on it, so being the closest I have to a vanilla PC available I hoped it should be a smooth and seamless upgrade and once complete I can then add Visual Studio 2015 onto it and then start exploring the Universal App capabilities.

This post is one I've decided to update as it goes along so lets start at the beginning...

You can wait for Microsoft to decide when your upgrade will happen by having the latest 8.1 updates installed and clicking on the Windows icon on the task bar...

Or, there is a way to skip the queue by going to: Microsoft's Windows 10 website and downloading the Media Creation Tool. 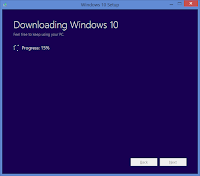 A waiting game...
Once you have downloaded the tool you can skip ahead and start installing the software. Well almost it takes a while and seems to be throttled for download speed from Microsoft's servers, despite having a nice fast connection it was downloading at a leisurely 2.4Mbps - sigh... 2 hours in and its now up to 45% this could take all day..

The entire upgrade is around a 3GB download with unsurprisingly another 1GB of updates (in two hefty updates) to then install after that but that aligns to the new Windows As A Service model.

Windows as a Service.
Windows 10 brings a whole new model to the idea of Windows, that this is the last version (ever) and it will now follow the iOS and other models where it continually updates in the background as new features and capabilities come along and bits that don't work disappear. This means that anyone reading this blog post in a years time will encounter a different version of Windows entirely from the version I am installing today. I quite like this concept of Continuous Updates it nicely aligns with the latest thinking in terms of Software Development (DevOps and CI/CD) in that software should just continually change and update in a gentle flowing way based on what works and small wins of good value changes. It means the need for big bang upgrades and hefty changes in the future should just disappear. However I do have a slight nervousness about it on such a big scale the risk for it going wrong is huge - the Windows/PC landscape is massively diverse there is no real "standard" for a PC it could have any form of cards and capabilities each is unique and different. That has what helped Windows to get "everywhere" in the past, it also is what has held it back in the consumer move to smart phones/devices and tablets. However this brings risk in that a pushed auto update to everyone might have knock on effects to disable devices or bits of obscure hardware and cause problems for users. That older model of reading about each update and checking it won't cause you problems of the past has gone.

Microsoft really do seem to have changed of late in their approaches and it does feel really quite refreshing. So well done to Microsoft for being brave and changing the mould with Windows.

After what felt like most of the day (although we did go out in the middle!) I am now typing this using Edge the all new browser that comes with Windows 10 and can describe the experience.
Firstly, its fantastic to have the Start menu back, while Windows 8/8.1 had the Start screen it always felt disjointed and dominating now its much more as you expect and want - it feels helpful so you can load a program at a glance and keep an eye on everything else you are doing. And that links into the other great change - Universal App's as mentioned above its nice to have these - it means the App's no longer take over and dominate the screen and can be moved around and resized. This links into the other great feature - multiple desktops which finally means you can finally have loads of applications running and slide between them OSX style. Nice feature shame it took so long. 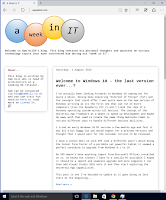 Overall, there are plenty of other reviews and websites detailing all the changes so I won't go into them all on here. For me personally, it was a long but smooth upgrade, it feels slicker, the computer feels faster and the changes have made things much easier to use. Definitely worth doing and much much nicer than Windows 8.1.

If I had loads of applications installed and files then I'd probably have been much more cautious however given I had a rare chance for a near vanilla experience I think it went very well and I really like the end result. I shall follow up with a further post in a few weeks time once I have had a decent play with it.