I have recently become really quite interested in the concepts around the Internet of Things and how every device everywhere and anywhere could be Internet enabled and on-line. Arguably its not a new concept, I remember when I was working at energis back in 2002 discussing over dinner about Internet enabled fridges and how they could both order items for you and also suggest meals based on what was inside. And even before then its always been bubbling around...

So, if its not really that new a concept - why the interest now you might be wondering. Well it seems like much of the technology it has come of age and the time to create such devices is here. WiFi and Bluetooth technology has dramatically improved, battery life from micro cell batteries can now last certainly many hours if not many days and processors have shrunk in terms of size and power consumption yet dramatically improved in terms of abilities.

A few years ago we had the mood light bulbs where you can change the colour based on how you are feeling (we have them now in our bathroom) and we have had the Raspberry PI as an excellent low power fully featured mini computer, and we have even upgraded our boiler to also be wireless so our thermostat is as mobile as we are. Yet none of this has felt that cutting edge or to be honest had many diverse applications, which brings me to the key topic of this post...


Today I was very lucky to meet the guys behind SAMlabs at Interop in London Excel. I had never heard of them before an given they are a small start-up funded by a Kickstarter campaign I doubt many others had either. However their stand which was about 6 foot square intrigued me and really caught my eye.

What they had on show was many, many micro devices all single function devices and connected back to a computer over bluetooth (so not quite true IoT yet - as no IP address/wifi enabled... however) each just had one job to do - be it a switch, a blub, a fan, a motor, a camera the list goes on. However you could change or interact with one of them and it can via software running on the host computer cause an event to occur on another one - all done through a simple drag/drop UI. 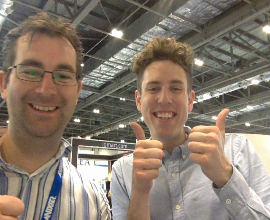 I really liked the concept - here is a photo taken by a mini camera that was triggered by a remote switch that I pressed - it also happened to light up a bulb on the desk and turn on a mini fan at the same time.

It does feel still quite early days, despite quite an array of devices what you could do with them felt a little limited by the need for a host computer and bluetooth ranges however I am sure over time this will rapidly evolve into something really quite clever. Imagine a draw of little micro devices you can then connect together to build and create a new gadget. A bit like smart lego to some extent.


Overall I felt they had some really good ideas (a little expensive to buy however given what they are and how few you get in a box!) and I am curious to see where they go with it next.... And none of this had anything to do with the fact their company is called SAM Labs - although I do like the name.